The people have spoken! We asked the more than 50,000 fans across our social media platforms to vote on what the new COSAFA Women’s Championship trophy should look like.

We presented three options on Twitter, Facebook and Instagram, and asked you to choose which one you believe we should present to the winners of this year’s tournament, which will be staged in South Africa’s Nelson Mandela Bay from November 3-14.

The overwhelming majority voted for the trophy below, with 67% of you in favour of it, a fresh new design for a new era of growth in women’s football!

We want to thank all of your who took part in the vote and hope you will tune in watch this year’s tournament to see it presented to the winners.

A new trophy was needed after South Africa claimed the previous one for the third time in a row, which means that they get to keep it.

Hosts South Africa will be joined by Angola, Botswana, Comoros Islands, Malawi, East African guest nation Tanzania, Zambia and Zimbabwe in what is a strong field in Nelson Mandela Bay.

The draw for the championships are scheduled to take place Thursday, October 22, at 10h00 (08h00 GMT) at Nelson Mandela Bay Stadium and will be streamed live on COSAFA.TV. Media are welcome to attend, though strict COVID-19 protocols will apply, which include mandatory mask wearing. 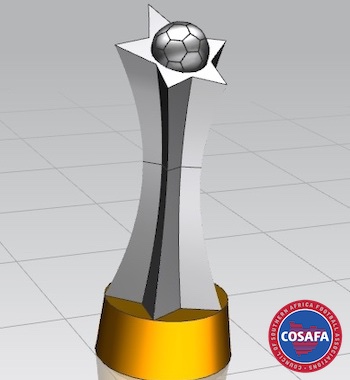