FIFA has had it rough over the last six months and with the announcement of the recent World Rankings, there has been more cause for conversation.

The announcement of the latest list took place on July 15 and unveiled the following as the top 10 in the world, according to FIFA’s complex ranking system:

There are obviously a couple of surprises there, notably the inclusion of Gareth Bale’s Wales who are appearing in the top 10 for the first time ever.

But who from the COSAFA nations have been seeded the highest. Here are some of the nations who have broken the top 150 in FIFA’s updated listings: 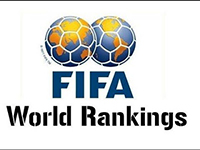 All of the data from the latest updates of the world FIFA rankings, and the World Cup qualifying draw can be found on their official app which can be downloaded for free here.

The app has been downloaded hundreds of thousands of times already by football fans across the world. With mobile Internet now being a prospering trend in the smartphone market many more people are able to access the Internet and mobile apps while on-the-go.

In fact, Spin Genie, a popular mobile-friendly entertainment website, states that 17% of the global population are now able to go online via their smartphones.

There are many great football apps available to download from Google Play and the App Store but, as a starting point, why not install the FIFA official app as a great way to keep up to date with all the breaking news regarding the COSAFA nations, right from your phone.