There have been seven previous COSAFA Women’s Championships since the first was played in 2002, each providing excitement and showcasing the quality of the talent in the Southern African region.

Ahead of the eighth instalment to be staged in South Africa’s Nelson Mandela Bay from November 3-14, we take a look back at the history of the competition over the last 18 years.

2002 COSAFA WOMEN’S CHAMPIONSHIP
The inaugural COSAFA Women’s Championship was staged in Zimbabwe from April 19-28, 2002, and was to feature nine teams before Mauritius withdrew. South Africa and hosts Zimbabwe were always going to be the favourites and it was they who met in the final. But before then, both stormed through their pools to make the semis.

Zimbabwe topped Group A as they claimed a record 15-0 victory over Lesotho, to go with wins against Zambia (4-0) and Malawi (6-0). The Zambians managed to fill the runners-up spot.

South Africa were even more emphatic in their pool stage campaign as they claimed victories over Botswana (14-0), a game in which Veronica Phewe scored eight goals, Mozambique (13-0) and Swaziland (4-0). Mozambique picked up the runners-up position in Group B.

Zimbabwe made short work of Mozambique in their semifinal with an 11-1 victory, while South Africa had it much tougher with a 3-1 success against Zambia in the other semi.

That set up a final at the Rufaro Stadium that was won 2-1 by South Africa thanks to goals from Phewe and Portia Modise.

Zambia took the bronze medal when Julia Siame scored the only goal as they beat Mozambique 1-0 in the third-place play-off.

2006 COSAFA WOMEN’S CHAMPIONSHIP
South African retained their title at the second COSAFA Women’s Championship, which this time was played in Zambia.

Again, there were originally nine entrants, but when Mozambique withdrew the field was cut to eight, though it was still played with three groups.

Zambia and Namibia qualified for the semifinals from Group A as they both managed four points. They opened their campaign with a 2-2 draw against one another, before Zambia beat Swaziland 7-0 and Namibia managed a 6-0 win against the Swazis.

In Group B, South Africa won both of their matches as they defeated Lesotho (9-0) and Malawi (3-0) to top the pool. Phewe and Modise were among the goals, as well as Joanne Solomon, who managed a hat-trick in the first game.

With Mozambique out, Group C was reduced to two teams, so Zimbabwe and Angola essentially played over two legs, with the Zimbabweans winning 3-1 and 1-0 to advance as pool winners.

South Africa were too strong in the semifinals with a 4-1 win over Zimbabwe, while Namibia edged Zambia 5-4 on penalties after the teams had played to a 1-1 draw.

Zambia took the bronze medal as they beat Zimbabwe 2-1 in the play-off, while South Africa fell behind to a Rita Williams goal for Namibia in the final, but Modise (two) and Kylie-Ann Louw netted as they roared back to claim gold. 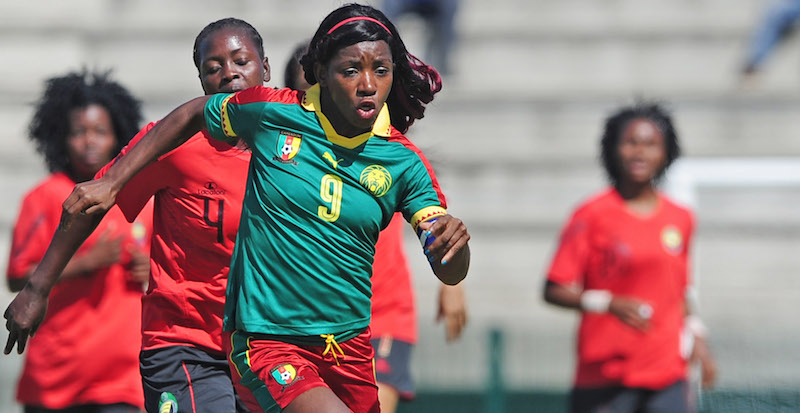 2008 COSAFA WOMEN’S CHAMPIONSHIP
South Africa sent their Under-20 side to the 2008 COSAFA Women’s Championship in Angola because of a clash of fixtures for the senior national side, but still managed to come home with the gold medal.

A young Noko Matlou proved the hero for them with a hat-trick in the final, as she netted 12 goals through the entire tournament to underline her huge potential. She is still playing for the team today.

South Africa had been placed in a tough group, but came through relatively unscathed as they beat Botswana (5-0), Zimbabwe (2-1) and Zambia (7-3).

That set up a semifinal with Namibia, where they again were forced to fight hard before goals from Tina Selepe, Lucinda Bowers and Matlou saw them win the day 3-1.

That set up a final against the hosts Angola when Matlou shone again as her hat-trick saw South Africa win their third straight gold and keep their grip on the regional showpiece trophy.

2011 COSAFA WOMEN’S CHAMPIONSHIP
Hosts Zimbabwe became the first side to break South Africa’s hold on the COSAFA Women’s Championship when they picked up the trophy on home soil in 2011.

The tournament was played at two venues across Harare and included East African guest nation Tanzania.

Zimbabwe breezed through Group A as they claimed three wins from three against Lesotho (4-0), Malawi (8-2) and Mozambique (3-0). They were joined in the semifinals by Malawi, who took the runner-up spot in the pool.

South Africa also had a perfect record in the pool stages as they claimed wins over Zambia (4-1), Botswana (4-0) and Tanzania (1-0), with Tanzania joining them in the knockout stages.  Zimbabwe found the going tough in the semifinals though where they were held to a 0-0 draw by Tanzania, but held their nerve to claim the penalty shoot-out 4-2.

South Africa were much more emphatic winners in their semifinal as they defeated Malawi 5-1 with future national team captain Amanda Dlamini grabbing two goals. That set up a final with Zimbabwe and it was the hosts who triumphed as Rufaro Machingura scored the only goal with six minutes remaining to claim gold for her team. 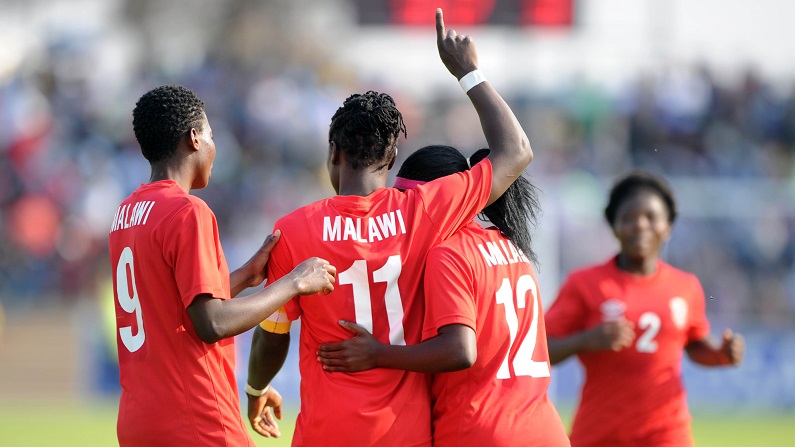 2017 COSAFA WOMEN’S CHAMPIONSHIP
Zimbabwe were the hosts of the tournament again in 2017 and made it all the way to the final, only to come unstuck against South Africa, who regained the trophy against their old foe.

South Africa eased through their first round group with wins over Lesotho (3-0) and Namibia (3-1), but did drop points in their final match, a 1-1 draw with Botswana.

Zimbabwe had to rely on finishing as the best runner-up to advance after they beat Madagascar 4-0, drew 1-1 with pool winners Zambia and were also held to a 3-3 draw by Malawi.

But the hosts breezed through the semifinal stage, easily seeing off East African guest nation Kenya 4-0 thanks to goals from Rutendo Makore, Berita Kabwe, Marjory Nyaumwe and Priviledge Mupeti.

The other semifinal was an absolute classic, one of the most thrilling women’s football games ever staged on the continent.   Barbra Banda, Grace Chanda and Misozi Zulu had put Zambia 3-0 up with 75 minutes on the clock, before South Africa rallied in remarkable style.

When Leandra Smeda headed home Banyana Banyana were given a sniff, and those chances increased when Smeda then added a penalty to make the score 3-2. The comeback was complete six minutes from time when captain Refiloe Jane tapped home at the back post to force the game to penalties.

By now the momentum was with the South Africans and they held their nerve in the shoot-out as Esther Mukwasa missed her spot-kick to see Zambia defeated.

Zambia took the bronze medal with a penalty shoot-out victory over Kenya after a 1-1 draw in the play-off, but the final was again decided by some late heroics from the South Africans as Smeda scored a 90th minute winner to give Banyana a fourth regional title.

Thembi Kgatlana had scored the opener for the South Africans just before halftime, but when tournament top-scorer Rutendo Makore equalised with 17 minutes remaining, it looked as though the final would have to be decided by penalties.

But when Smeda popped up to head home Chantelle Esau’s cross at the death, she secured the trophy for her side. 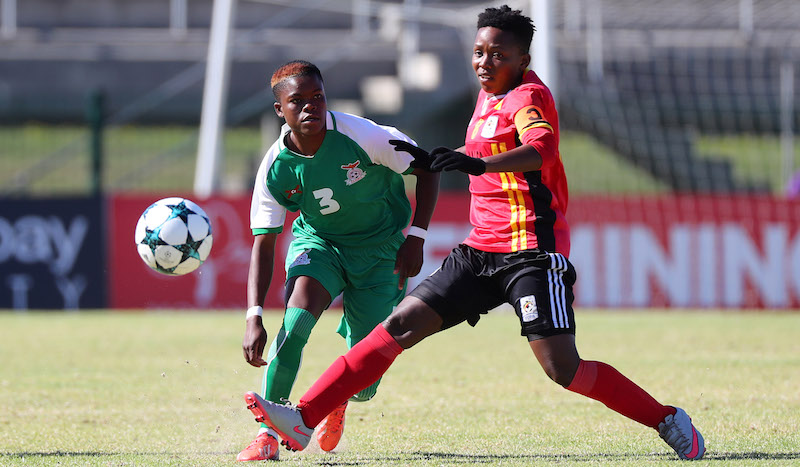 2018 COSAFA WOMEN’S CHAMPIONSHIP
Cameroon and Uganda were two exciting guests invited for the 2019 championship, which was staged in Nelson Mandela Bay for the first time, as South Africa proved too strong again for their rivals

The twelve teams were split into three groups of four sides, with the top team in each pool advancing to the semifinals, along with the best-placed runner-up.

South Africa won all three games in Group A, though they were run close in the first two with victories over Madagascar (2-1) and Botswana (1-0), before a 6-0 success against Malawi as Linda Motlhalo netted a hat-trick.

Zambia also claimed full points in Group B, beating Lesotho (2-0), Cameroon (1-0) and Mozambique (3-0) without conceding a goal. Cameroon were rampant in their other two fixtures, with wins over Mozambique (8-1) and Lesotho (6-0) to claim the best runner-up place and enter the semifinals.

Uganda edged top spot in Group C ahead of Zimbabwe, the crucial fixture in that pool being their 2-1 victory over the Mighty Warriors that would decide top spot.

A lone goal from Genevieve Ngo Mbeleck saw Cameroon edge Zambia 1-0 in the semifinal, a battle between two sides later headed to the 2019 African Women’s Championship in Ghana.

South Africa were 2-0 winners against Uganda in their semi, Motlhalo and Jermaine Seoposenwe the players on target. Uganda edged Zambia 1-0 in the bronze-medal match, while the final turned out to be a thriller.

Refiloe Jane gave South Africa the lead just before halftime, but Cameroon equalised through Ngo Mbeleck. Both sides had chances to win it, before Jane popped up again in injury-time to seal the victory for Banyana Banyana.

2019 COSAFA WOMEN’S CHAMPIONSHIP
A record 12 sides competed in the 2019 version of the competition, with Comoros Islands making their debut in the expanded event that was played in Nelson Mandela Bay.

It would be a difficult debut for Comoros, as they lost their opener 17-0 to South Africa, a record score in the women’s championship.

There were 10 different goalscorers on the day, but Refiloe Jane (four) and Amanda Mthandi (three) led the way for the hosts. They made it three wins from three in the pool with victories over Malawi (3-1) and Madagascar (3-0).

Zambia edged Botswana on goal-difference to top Group B, though both teams advanced to the semi-finals with the latter winning their place as the best runner-up.

Zambia humbled Mauritius 15-0, with eight goals for tournament top-scorer Rachael Nachula, before beating Namibia (3-2) and playing to a 0-0 draw with Botswana that ended up suiting both sides.

Zimbabwe grabbed a full haul of points to top Group C, easing past Angola (4-1), Mozambique (4-0) and Eswatini (7-0) in what was a powerful display from the side.

But they came unstuck against South Africa in the semifinals, with the hosts winning 3-1, while Zambia defeated Botswana 4-0 in the other knockout clash.

Zimbabwe did claim bronze with a routine 3-0 victory over Botswana in the third-place play-off.

The final between South Africa and Zambia was a tight affair, but a goal after 22 minutes from Tiisetso Makhubela sealed victory for the home side and a hat-trick of titles for coach Des Ellis.