The 2020 COSAFA Women’s Under-17 Championship will see a reduced field of five teams take part in the tournament in South Africa’s Nelson Mandela Bay from November 5-13.

Here is a quick rundown of each side and their past history in qualifying for global finals.

COMOROS ISLANDS
Comoros have been rare participants at this age-group level in women’s football and have yet to enter the African qualifiers for the FIFA Women’s Under-17 World Cup.

That could change though as they move into a new era of competition, which started with a first ever visit to the COSAFA Women’s Under-17 Championship in 2019.

It is fair to say there will have been plenty of lessons learnt after three tough matches for the side.
They started with a 5-1 loss to fellow islanders Mauritius, before going down 15-0 to powerful Zambia. They was followed by a 20-0 defeat at the hands of eventual winners Uganda.

Moinahedji Ali is the scorer of their only goal in the competition so far.

SOUTH AFRICA
South Africa are the most successful of the COSAFA nations in this age-group having twice before qualified for the FIFA Women’s Under-17 World Cup in 2010 and 2018.    They also reached the final of last year’s COSAFA Women’s Under-17 Championship, but were undone by the excellent Uganda, who proved too good in a 2-1 success in the decider.

There was much to admire about South Africa along the way though, they claimed an African international record 28-0 scoreline in their opener against Seychelles.     That was followed by pool stage wins over Botswana (5-1) and Madagascar (3-1) as they claimed a 100% record.

They edged Zambia 2-1 in a tough semifinal, but finally came unstuck against the Ugandans.

They are also still in with a chance of winning a place at the 2021 FIFA Women’s World Cup in India, where they will face Morocco in the final round of qualifying.   After a bye in the first round, they edged Zambia 3-2 on aggregate to advance to the third stage. Zambia won the first leg 2-0 at home, but South Africa roared back to claim the second 3-0.

Their first shot at the global finals came in 2008 when they lost 3-0 on aggregate to Cameroon in the second round after having a walkover win over Botswana in the first.     They humbled Botswana 22-1 over two legs in the 2010 qualifiers, but then lost 7-1 on aggregate to Nigeria to miss out on an automatic place at the finals.

They went into a play-off with Tunisia though and after a 1-0 away win and 1-1 draw, booked a place in Trinidad & Tobago.     There they found the going tough, with defeats to South Korea (1-3), Germany (1-10) and Mexico (0-4), but a number of that squad, including Robyn Moodaly, Jermaine Seoposenwe and Kaylin Swart have gone on to have successful careers.

South Africa beat Namibia 6-1 on aggregate in the qualifiers for 2012, but a 5-1 aggregate loss to Ghana in the next stage meant there would be no finals for them.    A year later they were surprisingly defeated by Zambia in the second round after a 3-3 away draw was followed by a 3-1 home loss.In 2015 they received a walkover win over Zambia, but in the final stage of qualifying lost 7-0 on aggregate to Nigeria.

They were back at the global finals in 2018 though as a 11-6 aggregate win over Botswana was followed by a 6-1 aggregate success over Morocco.

They meant they played at the FIFA event in Uruguay, where they again showed improved performance, but could not get out of their pool.     A 0-0 draw with Mexico was followed by a 6-0 loss to Japan and a 4-1 defeat to Brazil. 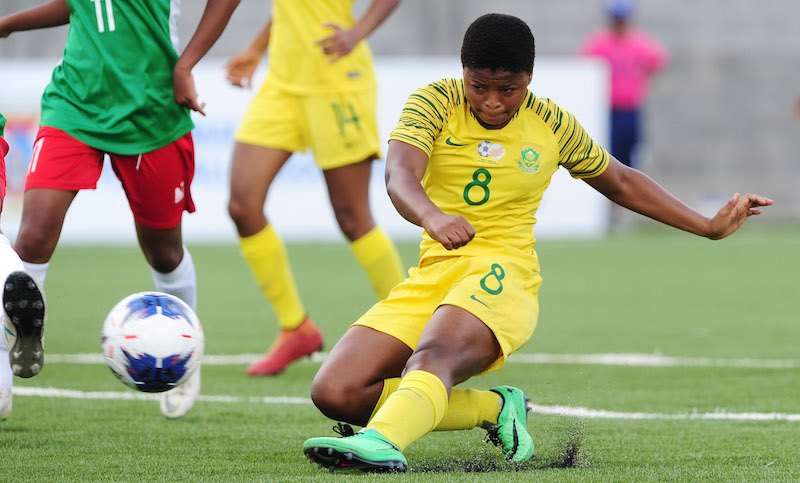 TANZANIA
Tanzania will be welcome guests at both the COSAFA Women’s Senior Championship and the COSAFA Women’s Under-17 Championship that will be held concurrently in Nelson Mandela Bay next month.   It is a chance for Tanzania to hold all three COSAFA women’s trophies at the same time, after their Under-20 side triumphed in that age group in the tournament that was also staged at the same venue in 2019.

On that occasion that beat Zambia 2-1 in the final and will have given plenty of hope to the senior side and Under-17 girls that they can follow suit.    e squad has been in camp in Dar es Salaam under the watchful eye of coach Bakari Shime, where they have been working hard in preparation for the tournament.

Shime will be keen to make up for the disappointment of the aside’s exit from the 2020 African Under-17 Women’s World Cup qualifying competition in March, when they went down 6-2 on aggregate to the powerful Ugandan side.    The Ugandans are the reigning COSAFA Women’s Under-17 Championship holders after their win in Mauritius last year, but lost the first leg to the Tanzanians 2-1, which shows the quality of Shime’s side.

They could not hold their hosts in the return leg though as Uganda ran out 5-0 winners.

Tanzania had defeated Burundi 6-1 on aggregate in the round before, with ever-dangerous Aisha Masaka grabbing a hat-trick in the first leg.

She also got both goals against Uganda and will be a real threat in Nelson Mandela Bay. Other stars of the side include Protasia Mbunda and Joyce Meshack.    It was the first time Tanzania had entered the World Cup qualifiers and having shown plenty of promise, will be eager to build on that performance.

ZAMBIA
Zambia are the only other nation from the region after South Africa to appear at the FIFA Women’s Under-17 World Cup after they contested the 2014 finals in Costa Rica.    They will dream of a return again, and will look to the COSAFA Women’s Under-17 Championship to lay the platform for building a squad towards that.

They managed to earn the bronze medal last time out as they showed plenty of guts to earn a point in their pool opener against eventual winners Uganda that finished 1-1.    That was followed by big wins over Comoros Islands (15-0) and Mauritius (8-0) to earn a place in the semifinals.

There they came up against hosts and od nemesis South Africa, but lost 2-1, before going on to claim a 3-0 success against Botswana in the third-place play-off.     Zambia first entered the running for World Cup qualification in 2008, but lost 6-0 on aggregate to Ghana in the preliminary round, and then skipped the 2010 qualifiers.

Zambia defeated Botswana 7-1 in the 2012 qualifiers, but then lost by the same margin on aggregate to Nigeria in the next stage.     They beat Botswana again 8-3 on aggregate in the first stage ahead of the 2014 finals, and were surprise 6-4 aggregate winners over South Africa following a 3-3 home draw and a 3-1 away win.

They sealed their place in Costa Rica, where they put in a decent showing. They lost their first two games to Italy (0-2) and Venezuela (0-4), but did beat the hosts 2-1 in their last match.      Zambia withdrew from the 2016 qualifiers ahead of their tie with South Africa, and then were surprise 6-5 aggregate losers to Botswana despite leading 5-2 from the first leg.

They had a walkover against Namibia in the latest round of qualifying, but then lost 3-2 on aggregate to South Africa despite winning the first leg 2-0 at home.

ZIMBABWE
Zimbabwe will make their debut at the COSAFA Women’s Under-17 Championship after missing out on the inaugural year.     The team are coming off as tough 7-0 aggregate loss to Botswana in the qualifiers for the 2021 FIFA Women’s World Cup, with a first leg 5-0 loss away followed by a 2-0 home defeat.

They also initially entered the 2008 qualifiers but withdrew before their tie against DR Congo.

Zimbabwe skipped the next five set of qualifiers, before making a return for the latest batch ahead of 2021 and will now look to grow their team in this age-group.    Competing in Nelson Mandela Bay will certainly go a long way towards helping them do that.