The 2020 COSAFA Women’s Under-17 Championship will be staged in South Africa’s Nelson Mandela Bay from November 5-13 and will be the second time the regional showpiece event has been held in this age-group.

The inaugural finals were in Mauritius in 2019 and provided some rich entertainment, with records galore and a historic winner.
Here is a day-by-day recap of how that championship unfolded.

DAY ONE
Jerusha Ramasawmy scored a brace as hosts Mauritius started their 2019 COSAFA Women’s Under-17 Championship campaign with a resounding 5-1 victory over fellow islanders Comoros at the St. François Xavier Stadium.

There was a frantic start to the clash with three goals in the opening 14 minutes as both sides looked nervous at the back.

Eva Pierrot opened the scoring for the hosts with a neat finish into the bottom corner of the net, but Comoros levelled shortly afterwards as Moinahedji Ali turned the ball home.
Four minutes later and the home side led again as Ramasawmy showed her lethal touch in front of goal to restore the advantage.

Ramasawmy missed with a good chance and Pierrot fired over the bar before the former finally did add a third for the home team with another well-taken strike.

Mauritius ended with a flourish as they scored two more in the final minutes, skipper Marie Verloppe getting her name on the scoresheet, along with Marie Quirin adding the fifth.

Zambia scored a superb late equaliser to rescue a point from East African side Uganda, who were made to pay for some profligacy in front of goal in their 1-1 draw in the other game in Group A.

Both sides had openings in a goalless first 45 minutes, but it was Uganda who took the lead on the hour-mark following a foul in the box on Kevin Nakacwa.

Uganda skipper Juliet Nalukenge stepped up and showed excellent composure to score from the penalty.

Zambia poured forward in search of an equaliser, which finally came on 84 minutes as Shelly Masumo rifled home an excellent shot that left Uganda goalkeeper Daphine Nyayenga with no chance.

DAY TWO
Oyisa Marhasi scored a first-half double hattrick and substitute Tiffany Kortjie repeated the feat in the second half as South Africa shattered all previous COSAFA records in an unprecedented 28-0 win over the Seychelles.

It came after Yaone Modise and Christinah Monyatsi both scored twice to lead Botswana to a one-sided 6-0 drubbing of Madagascar in the opening Group B outing.

South Africa’s one-sided victory significantly betters the record 17-0 scoreline that the country’s senior women’s side set just over one month ago when they defeated Comoros at the COSAFA Women’s Championship in Port Elizabeth.

Captain Jessica Wade, Nabeelah Galant and Sonika Mzingeli scored hattricks too as 11 players got their names on the scoresheet as South Africa romped to a 15-0 lead at half-time with coach Simphiwe Dludlu’s new-look line-up showing little mercy to their rookie opponents.

It took almost 20 minutes before Botswana broke the deadlock against Madagascar in the opening game on a cloudy day in Mauritius as defender Serati Modisenyane showed the way.

Modise then grabbed the second with an impressive shot from outside the penalty area to ensure a 2-0 lead for the Batswana, who had to weather some pressure from Madagascar to hold onto their advantage at the break.

But in the second half it proved largely one-sided as Monyatsi made it 3-0 after 58 minutes and Modise notched her second goal with some 11 minutes left on the clock.

Substitute Bofelo Rantsho added her name to the scoresheet with just two minutes remaining but the final act of the game fell to Monyatsi for a resounding ‘six of the best’. 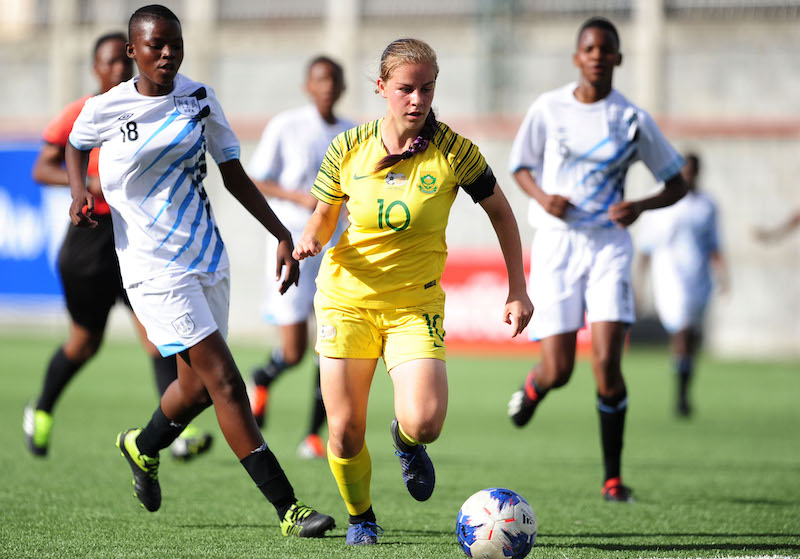 DAY THREE
Zambia showed their quality with a comprehensive 15-0 success over the Comoros Islands thanks to four goals from Florence Kasonde, who scored an 11-minute hat-trick.

It was a commanding performance from the Zambians, who opened the scoring through another hat-trick hero, Shelly Masumo, in the third minute.

Cindy Banda also scored three goals in the rout, which moved Zambia to the top of Group A ahead of their final pool match against hosts Mauritius.

Uganda completed an 11-0 rout of Mauritius, with captain Juliet Nalukenge’s six goals taking her to the top of the competition’s scoring charts with seven overall.

Fauzia Najjemba scored a brace and there was even a chance for goalkeeper Daphine Nyayenga to get her name on the scoresheet when she converted a penalty.

DAY FOUR
South Africa had nothing near the goal deluge that marked their opening game but a 5-1 victory over Botswana in Group B all but assured them of progress to the semi-finals.

The victory came after another sobering hammering for the Seychelles, who were beaten 15-0 by Madagascar earlier in the day and have now conceded 43 goals in two matches in their maiden appearance at the tournament.

Oyisa Marhasi got the scoring going as early as the second minute and added another in the second half to lay the platform for South Africa’s second victory in Group B.

South Africa captain Jessica Wade headed home the second for her team but Pearl Sikwane pulled one back for Botswana to make it a slender 2-1 lead at the break.

But South Africa gave themselves a little more breathing space after Tiyana Carollissen scored soon into the second half before going on to record a convincing victory and become the first team into the semi-finals.

Alinah Lalasoa scored a double hattrick for Madagascar as they had a one-sided win over their fellow Indian Ocean islanders while Lydia Razanajohary, who opened the scoring after six minutes, grabbed herself a hattrick.

Five other Malagasy got on the scoresheet to see the team go into second spot in the standings.

DAY FIVE
Uganda and Zambia sealed their places in the semifinals with emphatic victories in the final round of Group A matches.

Both teams finished on seven points, but Uganda headed the pool via a better goal-difference after the head-to-head fixture between the sides finished 1-1 on the opening day.

Uganda thumped Comoros Islands 20-0 as captain Juliet Nalukenge netted seven goals to take her tally in the competition to 14 and the top of the scorers charts.

Uganda led 14-0 at the break as they ran riot in the opening half, with Margret Kunihira scoring five goals in the match, and Shakira Nyinagahirwa and Fauzia Najjemba (four goals) also managing to net hat-tricks in what was an emphatic display from the guests. 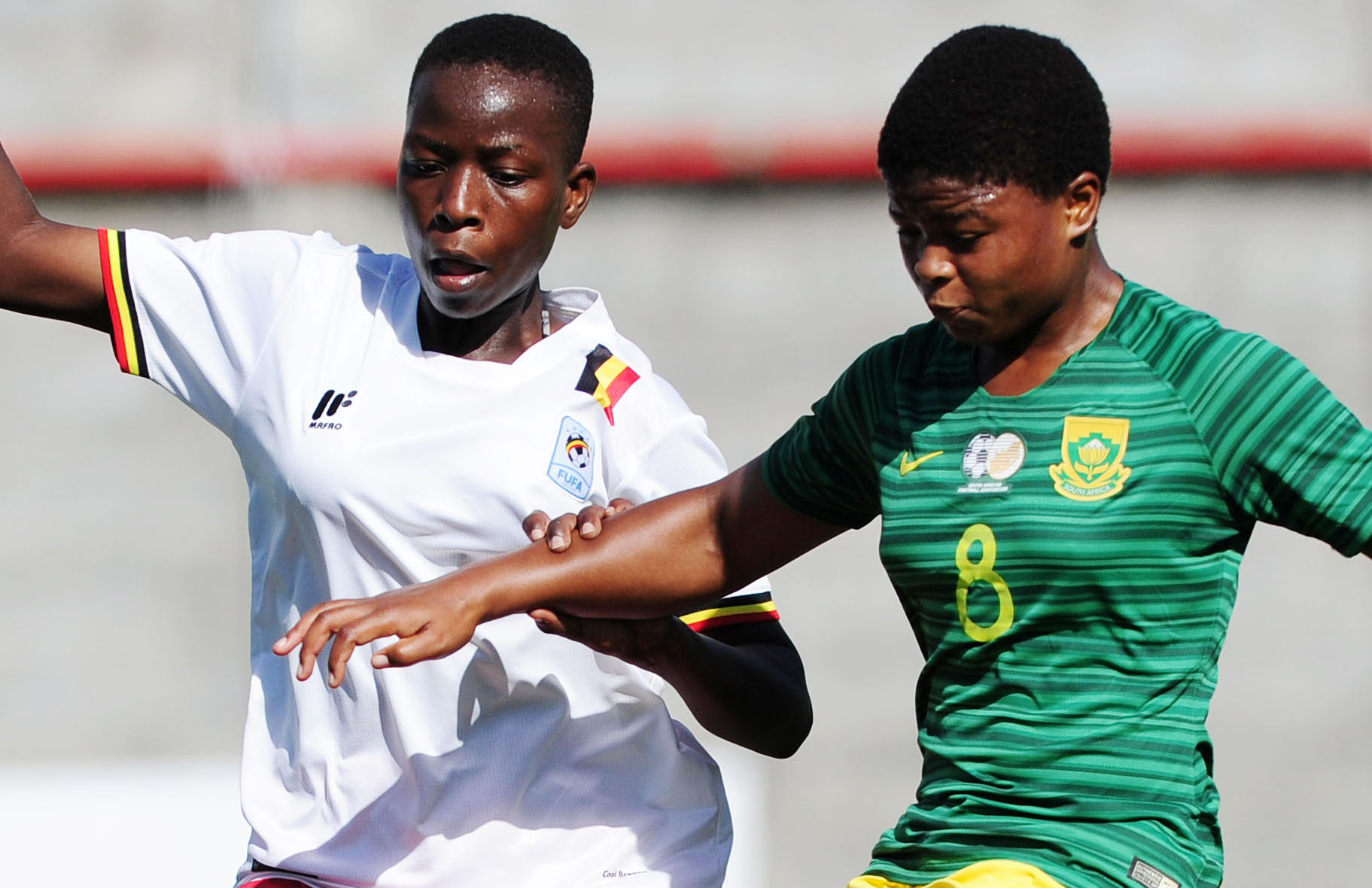 DAY SIX
Bofelo Rantsho and Pearl Sikwane scored five goals each as Botswana sealed a semifinal place with a comprehensive 14-1 victory over Seychelles at the Anjalay Stadium.

The Young Mares finish second in Group B behind South Africa, who maintained their 100 percent record with a 3-1 victory over Madagascar at the St. François Xavier Stadium.

Rantsho was unstoppable as she mesmerised the Seychelles defence, with a penalty and two free-kicks among her haul of goals.
She was closely followed by Pearl Sikwane, who also netted five times in what was an utterly dominant display. Kaone Mbongwe, Tlhompho Gabana and Lorato Motlogelwa (two) were also on the scoresheet.

Seychelles were able to celebrate their first goal of the competition, which will have been a great relief to them, as Kimbelly Chan-Tak-Hue what is a historic striker for the islanders for in this competition.

South Africa eased to a 3-1 win over the Malagasy despite missing talismanic captain Jessica Wade through injury.

Nelly Gamede opened the scoring midway through the first half with a long-range effort that cannoned in off the crossbar, before adding as second from the penalty spot.

Oyisa Marhasi took her tournament tally to nine when she raced onto a through-ball and slipped the ball under Madagascar goalkeeper Chrystina Faraniaina.

Madagascar barely threatened the South African goal but won a penalty with a little more than 10 minutes to go, which Marie Raveloarisoa finished with aplomb.

DAY SEVEN
South Africa and Uganda set up a final showdown after they had contrasting semifinal wins.

Uganda breezed into the decider with a 12-0 defeat of Botswana and their three most potent players were again on target.

Juliet Nalukenge netted a hat-trick, Fauzia Najjemba scored six goals and Margret Kunihira also got three.
It was tougher going for South Africa, who edged Zambia 2-1 in their semifinal, but deservedly came out on top.

Oyisa Marhasi opened the scoring with a tap-in after Zambia goalkeeper Inghu’tu Muchahabali spilled a shot from the edge of the box from South Africa skipper Jessica Wade.

Zambia were level on 28 minutes though and it was a superb strike from the dangerous Maweta Chilenga that crashed into the back of the net from 30-yards.

But in the classy Wade, South Africa always had a match-winner and her free-kick from some distance out sailed in over the head of Muchahabali five minutes into the second period.

DAY EIGHT
Uganda were crowned champions of the inaugural 2019 COSAFA Women’s Under-17 Championship after a hard-fought 2-1 victory over South Africa in the final.

It was a tightly contested decider in which the Ugandans shaded the chances, but a fitting end to what has been a magnificent tournament in which 158 goals were scored in only 16 matches.

Uganda opened the scoring through Fauzia Najjemba on 56 minutes as she burst between two defenders after some hesitant South African defending to slot the ball past goalkeeper Karabo Mohale.

It was a 13th goal of the tournament for the prolific forward, but there was no element of luck involved as she showed an expert technique to lift the ball past the on-rushing keeper.

The South Africans were level when Nabeelah Galant’s persistence down the right flank saw her cross for substitute Tiffany Kortjie to head home and make it 1-1.

But the East Africans regained the lead with five minutes remaining as Najjemba’s cross was turned home by the prolific Juliet Nalukenge with an expert finish.

Zambia claimed the bronze medal with a comprehensive 3-0 success over Botswana as they got reward for a fine tournament.

They took the lead on 27 minutes when Precious Nsama opened the scoring with her first of the competition, but it took until past the hour-mark for them to double that advantage.

Shelly Masumo has been a quality performer throughout and made the game safe with a second, before Maweta Chilenga added the cherry on top with a third with four minutes remaining.

South African captain Jessica Wade was named Player of the Tournament for her expert all-round displays that highlight her quality as a real star of the future in the women’s game.

Nalukenge won the Golden Boot prize with an astonishing 18 goals scored in the five games she played, while her teammate Daphine Nyayenga won the Golden Glove for her exploits between the posts. 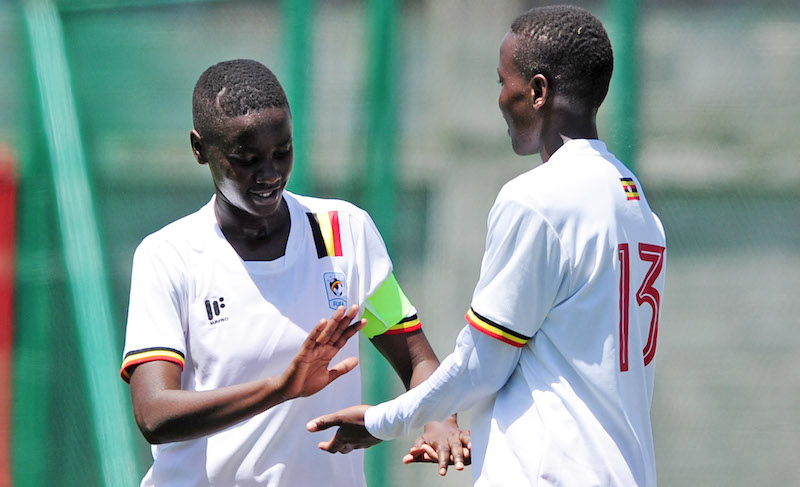