The 2019 COSAFA Men’s Under-17 Championships will be staged in Blantyre, Malawi from October 11-20 with the eight-team tournament set to showcase some of the region’s top young stars.

Here is a look back at the previous seven tournaments played since the first some 25 years ago.

1994 – SOUTH AFRICA
The first attempt at a regional Under-17 championship was played in South Africa in 1994 and won by the hosts.

They edged the likes of Zambia, Swaziland and Malawi in the opening stage, as well as recording a 9-0 win over Namibia.

That set up a semifinal with Zimbabwe, which was claimed 5-1 by the hosts, who then defeated Mozambique 2-1 in the decider.

The South African side included a number of players who would go on to have full international careers, including Delron Buckley, Steve Lekoelea and Wayne Roberts.

But it was Junaid Hartley who proved the star with hat-tricks against Namibia and Zimbabwe, as well as another goal in the final for a tournament tally of seven.

2001 – MALAWI
It would be another seven years before the competition was staged again and this time it took place in Malawi, with the cities of Blantyre and Lilongwe playing host.

Malawi ultimately triumphed as they defeated South Africa 3-0 in the decider for what should have been a fine new generation of players, though only Moses Chavula and Robert Ng’ambi truly went on to fulfil their potential.

A number of the South African players also did not make it despite a strong showing again, though the team did include stalwart Daine Klate and Lebogang Mokoena, who would go on to enjoy fruitful careers.

2002 – SOUTH AFRICA
The tournament returned to South Africa the following year and for the third time running it was the host nation who lifted the trophy.

This time round the competition was played in a round-robin format with the four-team field made up of South Africa, Botswana, Lesotho and Swaziland.

The highlight of the competition was a thrilling 5-4 victory over Swaziland.

Mokoena was again the star of the show for the home side as he netted six goals in the three matches played.

South Africa won all three of their games, while the other sides all finished on two points from three games. Swaziland claimed second place on goals scored.

2007 – NAMIBIA
Namibia hosted 10 teams in this latest edition of the competition that was won by Zimbabwe after they edged South Africa in the final on penalties.

Zimbabwe topped their pool with seven points from a possible nine, while Zambia ended top of their three-team group, which included an 8-0 win over Botswana.

South Africa were the other pool winners as they won both their games against Lesotho (5-0) and Mauritius (3-0).

Malawi won a play-off to take their place in the semifinals, beating Lesotho 4-0, but then lost to South Africa in the Last 4. Zimbabwe played Zambia and won 5-4 on penalties after a 1-1 draw.

They needed spot-kicks again in the decider after another 1-1 stalemate and this time triumphed 4-2. 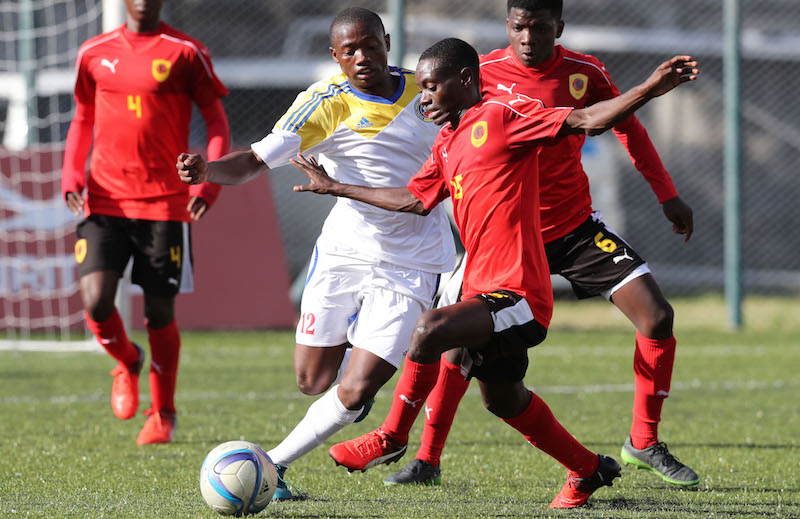 Afonso Manuel Binga of Angola challenged by Colani Dvuba of Swaziland during the 2018 Cosafa Under 17 Youth Championships football match between Angola and Eswatini at the Francois Xavier Stadium in Port Louis, Mauritius on 23 July 2018 ©Gavin Barker/BackpagePix

2016 – MAURITIUS
It would be a long 14-year wait for the next finals to be played and this time the competition was expended to eight sides and played on the Indian Island nation of Mauritius.

It proved a wonderful showcase of the skill among young players in the region and was ultimately won by Namibia.

There was a level of controversy when Zambia, who had stormed through their first round group with three wins from three, and 10 goals scored and none conceded, were disqualified from the competition after being found guilty of fielding two over-age players.

That meant Malawi and East African guest nation Kenya advanced from Group B, while the top two sides in Group A were South Africa and Namibia.

The South Africans eased past Kenya in the semifinals, and Namibia edged Malawi 6-5 on penalties after a 1-1 draw.

The final also ended 1-1 and Namibia kept up their strong shoot-out record as they edged South Africa 3-1 on penalties. Malawi finished third with a 2-0 success over Kenya.

Top-scorer in the competition was Malawi’s Peter Banda with five goals.

2017 – MAURITIUS
Zambia made up for their indiscretion the year before by storming to the 2017 title, beating hosts Mauritius 3-0 in the final.

The Young Chipolopolo started with a bang, beating Madagascar 7-1 in their Group B opener as Lameck Banda and Martin Njobvu both scored hat-tricks, before they edged old rivals South Africa 3-2 but then suffered a surprise 1-0 loss to Mozambique in their final pool game.

They still managed to finish top of the group on goal-difference, with South Africa the runners-up.

Malawi stormed to the top of Group A with three wins from three matches, including a handsome 5-0 win over Zimbabwe. In fact, they did not even concede a goal.

They were joined by Mauritius in the semi-finals after the islanders recorded wins over Zimbabwe (1-0) and Botswana (2-1), before losing their final game to Malawi.

The Malawians came untuck in the semi-finals though as Zambia cruised to a 2-0 win, while Mauritius defeated South Africa by the same scoreline in the other Last 4 game.

The result in the final might have been emphatic in Zambia’s favour, but it took them until the 72ndminute to make the breakthrough as Prince Mumba netted the opener. That was followed by quick goals via Christopher Phiri and Kingsley Hakwiya.

Malawi finished third after they beat South Africa 2-1 in the bronze-medal match.

2018 – MAURITIUS
The tournament was staged in Mauritius for a third successive year and was won by Angola, who proved the most accomplished side all through the competition with five wins, 15 goals scored and only one conceded.

They breezed through their pool with wins over Malawi (1-0), Eswatini (4-0) and Zimbabwe (2-1), which set up a semi-final with Namibia where they turned on the style to claim a 7-0 success.

Namibia had topped a tight Group A that saw three teams finish on six points, and during which they beat Seychelles 8-3, but advanced on the head-to-head rule.
Mauritius also went into the semifinals as the best-placed runner-up, where they met South Africa, who had taken seven points from nine in the pool stages.

The South Africans claimed some revenge for their Last 4 loss to the islanders in the previous year and ran out 2-0 winners.

That set up a final with the all-conquering Angolans and it was the latter who triumphed as Osvaldo Capemba scored the winning goal with just five minutes remaining.