Eight nations will contest theCOSAFA Under-17 Championships in Malawi from October 11-20, with the field containing many familiar faces and also a debutant.

Here is a team-by-team guide to the field and their history in the prestigious reginal competition.

ANGOLA
Angola are the title holders in the COSAFA Under-17 Championships after they claimed the trophy last year in Mauritius with a 1-0 victory over South Africa in the final.

Angola will therefore compete at the FIFA Under-17 World Cup in Brazil between Oct. 26-Nov. 17, so this competition gives them perfect preparation for that. Angola will make their debut on the global stage.

Angola have competed at the African Under-17 Championship on four occasions now, with their bronze medal their best showing. They exited in the group stages in 1997, 1999 and 2017.

The team also competed in the 2001 COSAFA Under-17 Championships but did not make it past the group stages, while it was the same story in 2007 when they finished third in a four-team pool.

They beat Eswatini 3-1, but then lost to Zimbabwe and Namibia, both by 2-1 scorelines.

One of the stars of that competition, Zito Luvumbo, later went for trials with English Premier League giants Manchester United.

BOTSWANA
Botswana have been regular participants in the COSAFA Under-17 Championships down the years but will be hoping to make it past the group stages for the first time in their history this year.

They featured in the first ever tournament in 1994, but lost all three games, going down 1-0 to Mozambique and Zimbabwe, and losing 3-1 to Lesotho.

In 2001 they claimed their first victory, a 5-0 success over Mauritius, but a 2-0 loss to Malawi meant they did not make the knockout stages.

The following year they played to two draws and a defeat, holding Lesotho (2-2) and Eswatini (1-1) but going down to South Africa (0-2).

The team also played at the 2007 event, but it proved a troubled tournament as they lost heavily to Malawi (1-6) and Zambia (0-8).

They were not present in 2016, the only tournament to date they have missed, but again exited in the pool stages the following year as they lost to Malawi (0-2) and Mauritius (1-2), but beat Zimbabwe (2-1).

The team claimed two wins in the 2018 tournament but it was still not enough to advance. A 1-0 win over Mauritius was followed by a 2-1 defeat of Seychelles, but they lost their final pool game to Namibia (0-2).

Botswana have qualified for the African Under-17 Championships on three previous occasions, but have exited in the first round in each. Their most recent appearance was in 2013, but they also played in 1995 and 1997.

COMOROS
Comoros will be making their debut at the COSAFA Under-17 Championships as they seek to develop a fresh generation of youngsters to bolster their senior national team.

The country’s football is on the rise at all levels and having reached out to the diaspora in Europe to bolster the national team, they are also eager to develop home-grown talent.

There are a number of Comoros players at clubs in France, Belgium and the Scandinavian countries, and this COSAFA Under-17 Championship will give scouts the opportunity to run their eye over more.

Comoros have been a COSAFA member since 2006 and have played in a number of senior and age-group tournaments in the recent past.
Comoros have never qualified for the continental or global finals at this age-group level. 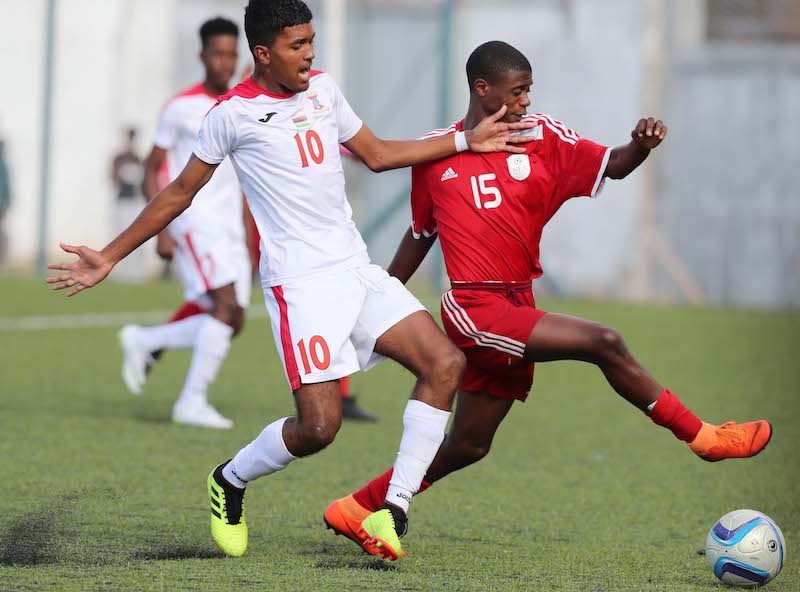 Jean Mervin Aristide of Mauritius shields ball from Friedemann Gerard Goraseb of Namibia during the 2018 Cosafa Under 17 Youth Championships football match between Mauritius and Namibia at the Francois Xavier Stadium in Port Louis, Mauritius on 21 July 2018 ©Gavin Barker/BackpagePix

LESOTHO
Lesotho have appeared in most of the COSAFA Under-17 Championships that have been played, though they did miss out on the 2016 and 2017 editions that were staged in Mauritius.

They were one of the original participants in the inaugural 1994 competition but bowed out in the pool stage. They claimed a 3-1 win over Botswana, but a draw with Zimbabwe (0-0) and a loss to Mozambique (0-1) was not enough to book a semifinal place.

They played just one match in 2001 after one of their pool opponents, Mozambique, was disqualified for fielding 10 over-age players, and that 3-0 loss to Zambia meant another pool stage exit.

Lesotho returned in 2002 and draws with Eswatini (0-0) and Botswana (2-2) were followed by a 4-0 loss to South Africa that ended their campaign.

They did not return again until 2018, when they again exited at the first stage. They claimed an excellent 0-0 draw with South Africa, but followed that up with losses to Zambia (0-1) and Mozambique (1-2).

Lesotho have never qualified for the continental or global finals at this age-group level.

MALAWI
Malawi have appeared in all but one of the seven previous COSAFA Under-17 Championships played and were winners in 2001 as they lifted the trophy on home soil.

Their star of that competition was Robert Ng’ambi, who would go on to have a superb career in South Africa and with the Malawi senior national team, and is still active today at Black Leopards.

Malawi breezed through their group on that occasion with wins over Botswana (2-0) and Mauritius (4-0), before defeating Zambia 5-4 in the semifinals.

That set up a decider with South Africa and Malawi prevailed with a comfortable 3-0 scoreline to lift the trophy.

They were beaten by Namibia on penalties in the semifinals after a 1-1 draw, but did pick up the bronze with a 2-0 win over Kenya.

Malawi beat Zimbabwe (5-0) and Eswatini (1-0) in the pool stages in 2018, but a 1-0 loss to eventual champions Angola meant they did not make the semifinals.

MOZAMBIQUE
Mozambique have been sporadic participants in the COSAFA Under-17 Championships but have appeared at the last two events.

They were runners-up in the very first competition played 1994 when they topped their pool with wins over Botswana and Lesotho, both by 1-0 scorelines, and played to a 2-2 draw with Zimbabwe.

The team beat Zambia 2-1 in the semifinals, but then lost by the same scoreline in the decider.
The team was disqualified from the 2001 tournament after fielding over-age players, and did not return until 2017.

There they beat Madagascar (2-0) and Zambia (1-0), but a defeat to South Africa (1-3) meant they did not advance past the group stages despite their rich haul of six points.

Mozambique have twice before qualified for the African Under-17 Championships, but exited in the group stages on both occasions in 1995 and 2001. 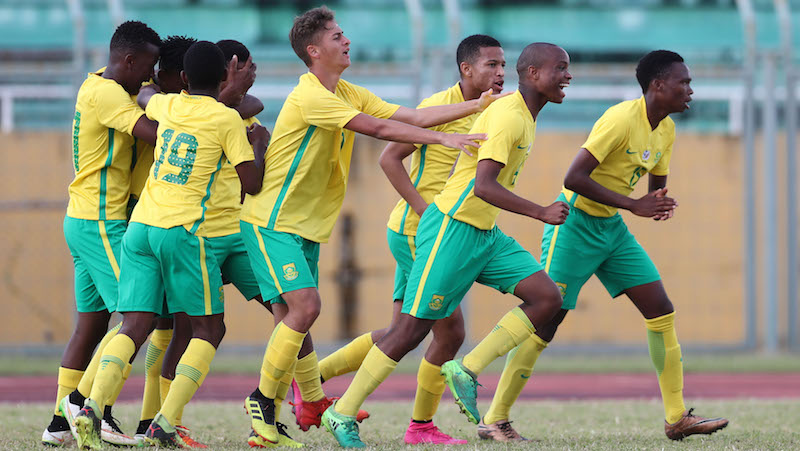 SOUTH AFRICA
South Africa are the only country to compete in every one of the seven previous COSAFA Under-17 Championships and also the only team to lift the title twice, though their last success came all the way back in 2002.

They have appeared in six finals in all – also a record – with the only time they have not made the deciding match being in 2017.

South Africa lifted the inaugural trophy in 1994 when they beat Mozambique 2-1 in the final with a team that contained the likes of Delroy Buckley, Steve Lekoelea and Junaid Hartley.

A draw with Zambia in their opening match was followed by wins over Swaziland (1-0) and Malawi (4-0), before they thumped Zimbabwe 5-1 in the semifinals and then delivered that victory over Mozambique to seal gold.

South Africa completed a full haul of nine points in the pool stages in 2016 as wins over Seychelles (1-0), Namibia (4-0) and Mauritius (2-0) quickly established them as tournament favourites.

This was doubly so when they beat East African guest nation Kenya 4-0 in the semifinals, but they were again undone by penalties in the decider.

After a 1-1 draw with Namibia, they lost 3-1 on spot-kicks to take home the silver.

They were not as dominant in the early stages of the 2017 finals as wins over Mozambique (3-1) and Madagascar (5-3) were either side of a 3-2 loss to Zambia.

They still did enough to move on to the next stage, where they lost to hosts Mauritius in the semifinals, and then Malawi in the bronze-medal match.

The 2018 tournament saw them reach the final again, but it would see them only claim silver.

Given their resources, it is perhaps a surprise that South Africa have only appeared at the African Under-17 Championships on three previous occasions, with their best performance a silver medal in 2015.

ZAMBIA
Zambia have been regular participants in the COSAFA Under-17 Championships down the years, but for all their power in the region have only lifted the trophy once.

They came unstuck in the semifinals though after a 2-1 loss to Mozambique, but rallied to beat Zimbabwe 1-0 in the third-place play-off.

They played just a single pool game in 2001, a 3-0 victory over Lesotho, before losing 5-4 to Malawi in the semifinals. Again they took home the bronze with a 2-0 victory over Eswatini.

They did not play in 2002, but returned in 2007 and once more had to settle for bronze. A 1-1 draw with Malawi was followed by an 8-0 success over Botswana to see them top their pool.

Zimbabwe were their semi-final opponents and after a 1-1 draw, it was The Baby Warriors who triumphed 5-4 on penalties. Zambia beat Malawi 1-0 in the third-place play-off.

The team were disqualified from the 2016 event for fielding two over-age players, but returned a year later to lift their maiden crown.

They advanced into the knockout stages with wins over Madagascar (7-1) and South Africa (3-2), and despite a 1-0 loss to Mozambique.

After a 2-0 semifinal win, Zambia completed a comprehensive 3-0 victory over hosts Mauritius in the final to take gold.

They could not defend that title in 2018 though as the team surprisingly exited in the first round. A 0-0 draw with Mozambique was followed by a 1-0 win over Lesotho, but their fate was sealed by a 2-1 loss to South Africa.